Teaser for Iceland on the Edge – Belgian Iceland Airwaves @ Bozar/AB

Posted in Iceland on the Edge Belgian Airwaves Icelandic music I love. Leave a Comment »

Performance of Icelandic Bands in China in Jeopardy

Chinese authorities seem reluctant to grant three Icelandic bands permission to perform at the Midi Music Festival, which will be held there the first week of May, after Björk declared support for Tibetan independence during her recent concert in Shanghai.
Björk’s stunt angered Chinese authorities and now it is uncertain whether the members of the three bands, Vicky Pollard, Hellvar and Motorfly, will be given a visa to enter the country, Fréttabladid reports.
“We are in constant contact with our spokesperson at the festival and he has told us to stay calm and wait,” said Ásgeir Gudmundsson, band manager for Vicky Pollard.
Information on the Festival @ http://wiki.rockinchina.com/index.php?title=Midi_Music_Festival_2008
Source: Iceland Review Online
www.icelandreview.com
The 3 Bands:
Vicky Pollard
www.myspace.com/vickypollardmusic
“Alien” Video
http://www.youtube.com/watch?v=Xym_HNSZGrI

"Dancing Queen"- ABBA Cover by The Sugarcubes is 54. Song of the Week

The Sugarcubes doing a (demo) cover of ABBA‘s “Dancing Queen“.

The GusGus bunch years ago in French Inrockuptibles Magazine 1999.

On 4. March GusGus announced that they (President Bongo & Biggi Veira, the only 2 members left in the band/collective) officially started working on their 6th Studio Album. The First Single is scheduled in July; The Album in the Fall of 2008.

Or
Wanderlust – the making of wanderlust 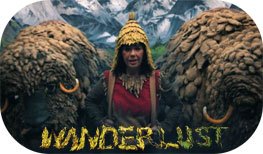 Making a splash
Published in Post Magazine 7. February 2008
NEW YORK — Music videos are not just for MTV anymore ; just ask Bowling for Soup. Or check out Björk’s latest — a Mongolian fantasia involving a romp in a CG river, a herd of digitally replicated giant yak puppets and lots more.
“Wanderlust” on her recent CD, “Volta” is six minutes long and the new video Wanderlust is over seven minutes with its extended intro. And it’s in stereoscopic 3D. With lots of 3D animation and effects and surreal characters and surroundings. The yaks even get to bellow rhythmically in the opening sequence.
Wanderlust appears in stereo — 3D glasses included — on Björk’s new DVD. But there’s more in store for such an ambitious video. The producers plan to get the piece screened theatrically in New York, LA and San Francisco. They also plan to run the video online for those who have their own anaglyph glasses. The televised version will appear in standard definition.
Damijan Saccio is principal and co-founder, with Scott Sindorf, of New York-based UVPhactory (www.uvph.com). The design, production and motion graphics boutique’s slogan is “How can we do something that we’ve never done before ?” Last August, Saccio and company were challenged with just that. One important factor in Wanderlust is the water in the river Björk, and her yaks, encounter. It is alive. The video’s San Francisco-based directors, who do business as Encyclopedia Pictura (represented by Ghost Robot in NYC), intended to give Björk a seemingly living testament to her song’s inner meaning.
But this water, created by Saccio’s team at UVPhactory in SoftimageXSI, would be interactive, it would have full three-dimensional depth and would be woven, not from some shrink-wrap water-generating software, and not from a particle program, but from an XSI “human hair” simulating module. The undulating river water also bubbles, boils, splashes (splashing is a particle program) and ultimately generates a “rivergod” being which in turn causes a dramatic waterfall “vortex” that sweeps away the god, Björk, her fantastical alter-ego and even the yaks.
Saccio salutes a large team of hard workers on Wanderlust — there were about 40 artists contributing, off and on (see their Website for complete credits), to the post process alone and they created 37 different water shots. Softimage even sent an engineer, Dilip Singh, to help UVPhactory train XSI’s human hair program to behave like water. UVPhactory compositors worked in After Effects to provide rig removal and background removal for the numerous comps in essentially every scene.
GIANT YAKS
Directing team Sean Hellfritsch and Isaiah Saxon intended to do big things for Björk with a decidedly small music video budget. But they have the right attitude for making things happen — do a lot of it yourself and depend on your friends. First, their camera of choice was 2K — 2048×1152 at 24fps — but it was not a budget-breaker, it was Silicon Imaging’s new SI-2K Mini. Along with the Mini, they got a CineForm RAW encoding license. Joel Edelstein joined the two Minis to shoot stereo.
Shooting greenscreen locally in Long Island City (Hellfritsch and Saxon lived in NYC during their months of work on the video) the two cobbled together two interesting solutions. On set they used a custom-built beam-splitter rigged up with a mirror to line up the two SI-2K Minis for proper stereo. They had to shoot their giant yak (a fanciful, very large, yak-like beast with two performers inside giving it movement and expression) from many angles so that later UVPhactory could composite it repeatedly to create a yak herd in which the yaks are seen in different positions from different angles. They also had to capture Björk’s performance in stereo : she “rides” a yak (actually two furry humps resembling the yak’s) ; she deals with the river water as if it’s a character unto itself — and so it is, there’s the “river god” (a live actor digitally augmented) ; she faces off with her own personal demon — her character’s dark side, called her “painbody” — another live performer who materializes out of Björk’s backpack ; and these characters then swirl into a vortex-like CG waterfall plummeting downward at the video’s climax.
Hellfritsch and Saxon shot Björk and her doppelganger hanging upside down so they could capture the look of their hair falling naturally.
The directing partners’ second innovation was for use in post : a wooden box of their own making allowing a polarized stereo display with a right-angle beam-splitter. Dubbed a “Vizard,” the box allowed them to quickly gauge if their two stereo streams flowed naturally into one 3D image. UVPhactory’s After Effects compositors worked in anaglyph mode — classic 3D glasses with one blue eye and one red.
EDITING IS GOOD
The directors got right to work editing Wanderlust in Adobe Premiere after they shot it last summer. Of course, this greenscreen shoot would yield a rough cut full of holes to be filled with matte backgrounds of fabulous mountains and sky, lots of yaks and the CG water — but at least it’s a roadmap. For Saccio Wanderlust proved to be “a unique challenge. Being shot stereographically, every scene we do in 3D we have to do twice. This was a labor of love.” 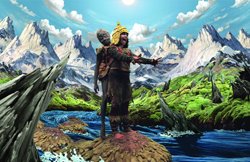 Lay Low, the singer-songwriter is added to the Program of the Belgian Iceland Airwaves – Iceland on the Edge Festival.
So she’ll perform the 30. April too @ the Bad Taste Evening @ Bozar/Paleis voor de Schone Kunsten
“Please don’t hate me” Lay Low Video
http://www.youtube.com/watch?v=xt-uv6bcq2g 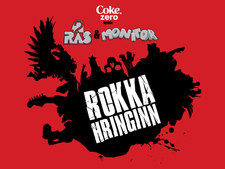