Gunnar L. Hjálmarsson better known as Dr. Gunni releases his New Album 3. April.
Maybe there will be Concert @ Sódóma Reykjavík venue 22. April (last winterday). The same day Eberg is playing there too, he’s releasing his Album “Antidote” also on the April the 3rd.
Dr. Gunni inniheldur
Erðanúmúsik Label
Prince: 2000 IKR as a CD or 1000 IKR for download
CD comes with a 72 pages booklet.
Only 300 copies will be made of the CD.
Review by Dr. Gunni himself: Þetta er helvíti góð plata, þótt ég segi sjálfur frá.

Entertainer Páll Óskar Hjálmtýsson (aka Paul Oscar) drolly describes himself as “Iceland’s biggest pop star icon if there ever was one”.
An Interview about the Icelandic pop sound, gay activism and living to the ripe old age of 111.
By Eliza Reid
Published in Iceland Review Magazine 46.03.
Confessions of a Pop Nerd
ER: What’s your favorite part of being a musician?
All the nerdy things. We have a huge box that can make a thousand different versions of a “beep” and the trick is to find the right “beep”. This is what I love. But I also love performing live. There is this energy to performing live that has always fascinated me and I’ll be interested in that until I’m 80.
ER: So are you going to be performing until you’re 80?
Yes. Like Mae West.
ER: Is there an Icelandic pop music scene?
We have a very specific sound called the Icelandic sveitaball (countryside ball) sound. You could say it’s soulful rock. It has great melodies and great hooks. Icelanders are rock ‘n rollers really. Icelandic people cannot dance to the rhythm; they dance to the lyrics. If you go to a disco, you’ll notice that Icelanders don’t move their feet to the rhythm but they do sing along.
ER: Why?
It’s like they don’t have the rhythm in their feet, but they have the knowledge in their heads. It’s probably because our forefathers were stuck in these muddy cottages writing poetry and the sagas. This is our origin.
Read more @ www.icelandreview.com/icelandreview/feat/?cat_id=16567&ew_0_a_id=322017
For Charlotte.

“Don’t Be A Stranger” by Feldberg.
Eberg (Einar Tönsberg) & Rósa (of the band Sometime) worked together under the name Feldberg. Duo recorded six songs.
Song is used in a Nova Ad.
Music by Eberg/Rósa is also used in an Ad for Kringlan (Shoppping Center).
www.youtube.com/v/sH7djv_N-DI&hl&fmt=18

And in a non-commercial Ad for Umferðarstofa (Road Traffic Directorate)
www.youtube.com/v/DnF4jX7f_JI&hl&fmt=18

The Song of the 105. Week is “Cold Hands“, a song by Cosmic Call, a band from Akranes, a town known for its cement plant, nearby alu plant & the band Worm is Green.
Shortly, the band changed their name, previous called The Pet Cemetery. The Pet Cemetery didn’t win the Global Battle Of The Bands in 2008 (Agent Fresco did).
Recently they recorded an EP called “Cosmic Call” @ Studio Sýrland, to be released very soon.
I’m going to see them performing @ the Nokia on Ice Festival next Friday 3. April. I booked my ticket today. Other bands on stage are Jeff Who?, Mammút, Bang Gang, Sometime, Dr. Spock, Sudden Weather Change, DJ Matti & Bárujárn.
www.myspace.com/cosmiccallmusic 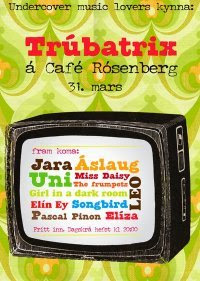 Trúbatrixur á íslandi
The little offspring of Undercover music lovers movement and was inspired by the Melodica acoustic festival which was held in August last year.
The idea came from watching all the amazing talented women who performed over the weekend and one of them thought, why not create a network of women in music and arts and have concerts and venues and art and what not?
Program 31. March @ Café Rosenberg @ Klapparstígur
8:00 Opnunar atriðið 3 raddir
8:20 Frumpets
8:45 Miss daisy www.myspace.com/missdaisymusic
9:10 Elín Ey www.myspace.com/elineyj
9:35 Pascal Pinon www.myspace.com/pascalpinon
10:00 Girl in a dark room www.myspace.com/girlinadarkroom
10:25 Uni www.myspace.com/unnuruni
10:50 Elíza www.myspace.com/elizanewman
11:10 Jara www.myspace.com/jaramusic
11:30 Áslaug Helga www.myspace.com/aslaugh
And it’s for Free!
www.myspace.com/trubatrix

Vote for the 100 Best Icelandic Albums Ever Made

You can vote for the 100 Best Icelandic Albums ever made @ this site:
www.tonlist.is/Fokus/Kosning/Vote.aspx or
www.tonlist.is/100bestu
Organised by Félag HljómplötuFramleiðenda (FHF), radio Rás 2 & website Tonlist.is.
Check the long list of 485 Albums, pick up to 50 Albums and Vote (“Kjósa!”).

The New Album by the band Leaves will be released 11. May 2009. This 3. Album is entitled “We are shadows“. Their previous Album “The Angela Test” was released 4 years ago. Debut “Breathe” in 2002. The band is on stage @ Sódóma Reykjavík spot 15. April.
www.ruv.is/heim/vefir/ras2/poppland/meira/store159/item257454
More Leaves @
www.myspace.com/leavesmusicspace
www.leaves.is
Photograph of Leaves @ Hafnarhusid @ Iceland Airwaves 2006 by Wim Van Hooste.